Danny Schmidt makes films and pictures for a living and he is really happy about that.  He has degrees in film and science, but most of his know-how comes from his many experiences producing imagery in far-flung places around the globe.  He has worked extensively for National Geographic, PBS, NASA, the National Science Foundation, and lots of other TV and non-profit entities over the years.  He lives in Colorado with his wife and Newfoundland mix, but you’ll probably see him at the airport.

Q: How did you get started in your career and was there anyone or anything that has influenced you?

I guess my career officially started down this path when I enrolled in a specialized MFA program in Science and Natural History Filmmaking at Montana State University. It’s essentially documentary grad school for scientists. I’ve been very fortunate along the way to collaborate with and learn from many talented creative people over the years.
Every experience has built upon forging these relationships.

Q: Has there been a project or individual that inspires you and challenges to you excel in your work?

I had an early project in grad school documenting the complex problems of the institutional feeding of wildlife in the Greater Yellowstone Ecosystem. It’s a systemic issue that taught me just how deep you need to go as a documentarian to really tell the whole story.

Q: Please give me the synopsis of the National Geographic Columbia project and what is the project’s formal title and where can it been seen?

In March of 2015 I went on assignment for National Geographic to make a film about the plight of the brown spider monkey in Colombia’s Magdalena River Valley. Recently there had been reports of albinism in the population ­ a direct result of the genetic bottleneck caused by habitat fragmentation. I was fascinated with these “ghost” monkeys ­ white aberrations of the species and how that might be an interesting entrance to tell the  bigger story.

The film is called Ghost Monkeys of Colombia and can be seen here: http://video.nationalgeographic.com/video/news/150417­ghost­monkeys­colombia­vin

We spent 2 weeks documenting the monkeys and the ecosystem. The weather was incredibly hot and humid ­ over 100deg and 100% humidity ­ and it made for rough working conditions to say the least! We traveled by plane, car, boat, and eventually by foot to find the monkeys in their native habitat. The crew size was small ­ myself and my
collaborator Federico Pardo, an AC, PA, and, of course, the local guides and researchers who make a trip like this possible.

We shot primarily on the Sony FS7 with Canon telephotos attached via Metabones Adapters. We had lots of other toys/tools as well: Kessler jib and sliders, Phantom drones, and 2 sets of Cartoni sticks.

Q: Who did you work with – crews names and titles?

I worked on this project with my longtime collaborator and good friend Federico Pardo. We also had a talented AC/Drone Op named Juan Pablo Bueno and a very helpful PA/BTS photographer Camila Rodriguez. There are too many local field guides to name, but most importantly, Dr Andrés Link from Proyecto Primates, was essential to telling this story.

There were also lots of National Geographic folks involved in the pre and postproduction phases, but Jeff Hertrick was our Executive Producer.

Q: What gear did you bring and why did you choose it ?

We knew we wanted to shoot the natural history and wildlife in 4K. We also knew we needed a lens that could reach way into the canopy. For this reason our primary setup was a Sony FS7, Tamron 150­600 EF, and a Metabones EF/NEX Smart Adapter. It was great to try out this new offering from Sony. It’s quite an amazing camera for the price. We also shot on aCanon C300 and with a 100­400L as a backup and second camera. Knowing we were going to edit and deliver in 1080 made this a good choice for b­cam. Editing in 1080 also gave us the freedom to punch in on the 4K footage if needed.

We had a variety of lenses with us as well, most of which seemed to get used at one point or another: Canon 35L, 24L,100L Macro, 24­105L, Tokina 11­16mm, and a few Rokinon Cine primes. We shot time­lapses on a 5D Mark III and a 6D, aerials on a Phantom 2 with GoPRO 3+, and jib shots on a Kessler Pocket Jib. We also had a new set of Cartoni sticks (the Stabilo with Focus HD head) and they worked incredibly well. It’s a great lightweight setup and handled the weight of the Sony FS7 and long lens quite nicely.

Q: What were some of the on location challenges you encountered and how did over come them?

All of our challenges were environmental: the heat and humidity were intense, and of course the insects in the tropics can be a bit maddening at times. We brought our own generator for charging batteries and offloading footage ­ essential when you shoot so many cards from so many different cameras throughout the days.

Q; Anything specific you would like to “call out” on why you choose Cartoni and regarding the challenging location performance?

We wanted lightweight, carbon fiber tripods with 100mm bowls to support bigger lenses/cameras. We also needed a system that was compact enough for travel and hiking long distances through thick jungles. The Stabilo legs handled the challenge perfectly!

Q: What advice would you give an aspiring documentarian?

I would say most importantly you need to work on projects you care about deeply. This work is not easy, so if you’re not 100% into the subject matter it’ll be hard to give it your all. I would also say that it’s important to listen to the people around you. No one has a monopoly on good ideas and documentary film is a team sport!

Q: Please give us the top ten (or five) tips of shooting in extreme conditions. Real life lessons that you have learned. 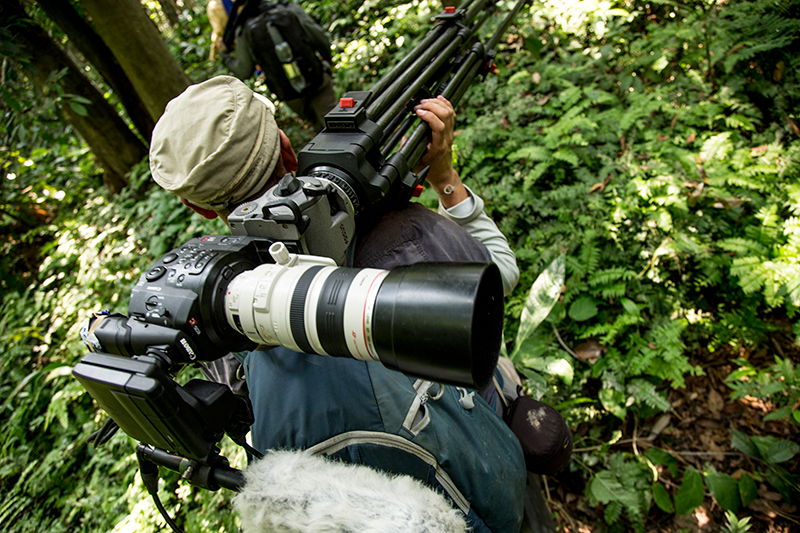 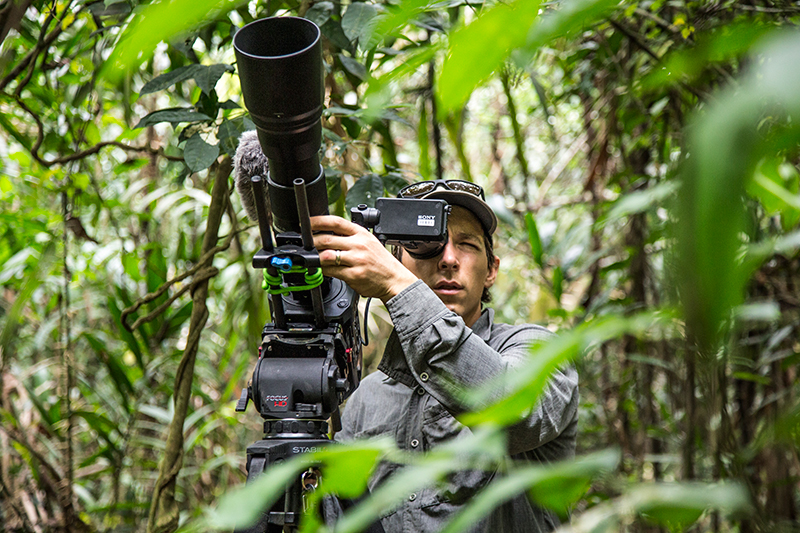 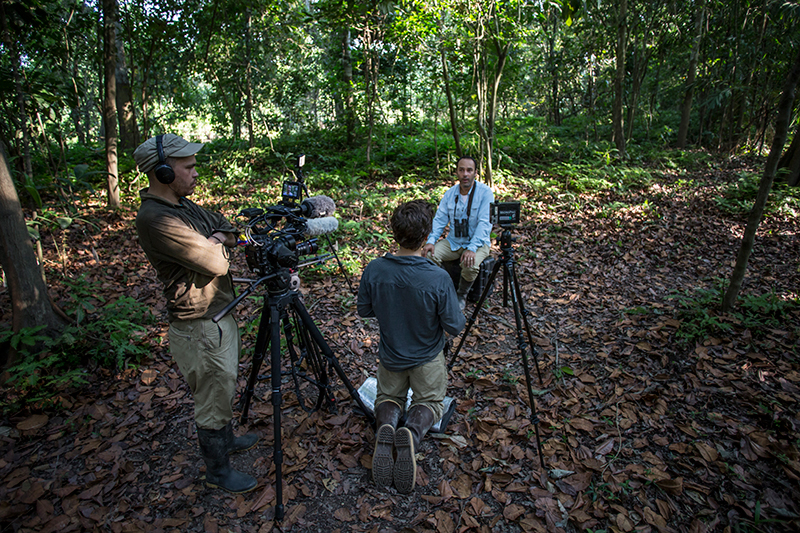 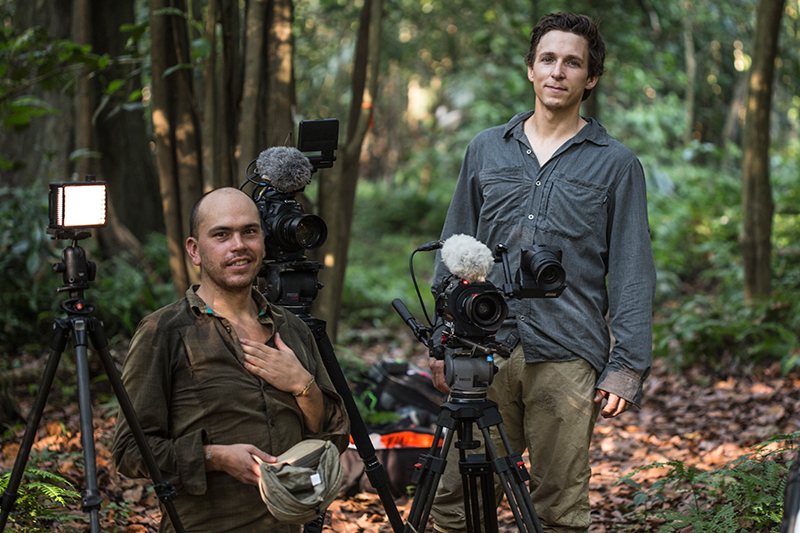